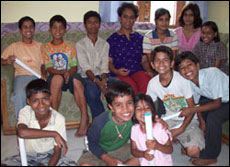 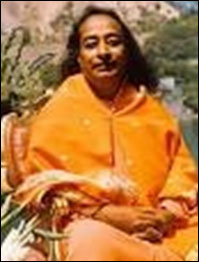 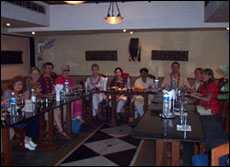 Paramhansa means “supreme swan” and the title was bestowed on Yogananda by his guru Sri Yukteswar. The swan has been, since ancient times, a symbol of divine enlightenment. The reason is threefold. First, like the swan, which is equally at home on land and on water, the enlightened yogi is at home both in this world and in the ocean of Spirit. Second, the swan is believed to have the ability, when it sips a mixture of milk and water, to swallow only the milk; presumably what it does is curdle it. Similarly, the hansa, or enlightened yogi, can discriminate clearly between the “milk” of divine truth and the “water” of delusion. Third, hansa(swan) in Sanskrit means also han sa (“I am He”): words expressive of the blissful realization of a true master. Supreme among such “hansas” is the parama(supreme) hansa. Already liberated, the paramahansano longer needs to combat earthly delusions with the sword of discrimination, for he sees the Divine at all times effortlessly, everywhere.  Paramhansa Yogananda was one of India’s  greatest Masters.